From West Bay to around the World | #WBCStories

As we celebrate the incoming 25th anniversary of West Bay College, let us take the time a look back at the 25 wonderful years of the school. This is the birth of #WBCStories. Where different people who have become a part of West Bay College share their stories and experiences.

The school has had countless students throughout the years but today we hear the story of 2nd Engineer El Cid D. Ebreo. He was a graduate of BS Marine Engineering batch 2011 and was recognized for his academic excellence and graduated with award for academics. 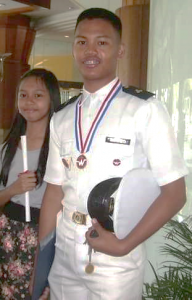 “When I was in Taguig Science High School, West Bay College conducted a career talk and entrance exam / interview. Engr. Ben Chiongbian saw my scores so he took me as his scholar. I was not interested with Maritime before until WBC went to our school and explained the benefits of being in the maritime industry, like having a high salary, seeing the world for free, employment opportunities with partner companies such as Magsaysay Maritime Corporation. I got more interested in enrolling in West Bay because I felt the enthusiasm of Engr. Ben Chiongbian in investing in the young generation of seafarers. He always believed that in the future we will become world class seafarers, which I could proudly say we truly became.

Learning maritime technical knowledge is something that I never heard of. That opened up my curiosity and enthusiasm to learn. One of the most memorable parts of my WBC journey is when we had our shipboard familiarization where the theories that we learned from the classroom turned into experiences. Not only the learning experience itself, was memorable for me. Here I made new friendships, where we shared the same goal of succeeding in the future. We enjoyed our company inside and outside the classroom.

Wearing the merchant marine uniform is one of the best privileges for me. Neatly pressed uniform, shined shoes, shined buckles and paraphernalia, proper haircut. I felt more than just being a student or a cadet. I felt I was a gentleman, and a future maritime officer.

Different professors, different experiences too. Professors are humans too, no one is identical with the other. Some push us to our limit, some make it relatively easy for us. At times we work hard for our grades, to maintain our scholarship. But within those 3 years in the school I almost never felt the hardships in my studies because I have learned to love the profession I chose.  It is the same in the actual field. Different ships, different companies, different leaders, different seas give us diverse challenges that we must always be ready to face.

After graduating from WBC and completing the PST Program of MIS, I was accepted in Fairmont Fleet of Magsaysay Maritime Corporation. In September 2011, I boarded my first ship assignment as an Engine Cadet. I served onboard the PCC for almost 13 months to complete the sea phase of my Bachelor’s Degree in Marine Engineering. I enrolled in a review center and took the PRC Board Exam. I passed the written type test in February 2013. After completing my required training for my Certificate of Competency, I went back to sea as an Oiler, then promoted to 4th Engineer after a couple of months. I served 2 more contracts as 4th Engineer then I was promoted to 3rd Engineer, which is my current rank onboard. Since I had more than 12 months sea service as OIC – EW, I took the Management Level Course and the Management Level Licensure Exam by MARINA and successfully passed. I currently have a 2nd Engineer’s License.

This photo was taken in Hollywood Walk of Fame in California, U.S.A. 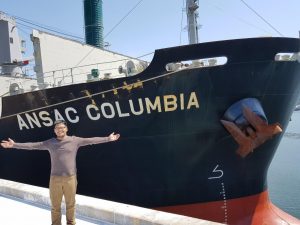 This is my recent photo taken in Portland OR U.S.A. before going on shore leave

I served a variety of ships, Pure Car Carrier, Salt Carrier, Wood Chip Carriers, and Bulk Carriers. I already traveled to almost every continent of the world. I work with a full complement of Filipino crew and under a mix of Filipino and foreigner superintendents.

West Bay College is where I began the journey of my career. I can proudly say, my school became the catalyst of my success. But this will be only possible if you believe in yourself. If you have chosen the Maritime career, you must learn to love it. Embrace it. Live it. Most importantly, have faith in God always, through thick and thin of life. Surely success will never be too far from you!”